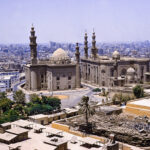 Al-Rifa’i Mosque, a self-contained landmark with four fully articulated facades, a highly ornate Mamluk-style dome, and a tower, responds to its surroundings.

This monument marks a turning point in Egyptian political and cultural history.

In Cairo, Egypt, there is a wonderful mosque for Muslims called Al Rifa’i Mosque.

The Al Rifa’i Mosque, which is available to the public and is situated next to the Saladin Citadel in Cairo, is direct across from its historic equivalent, the Mosque-Madrassa of Sultan Hassan.

Who is the owner of the mosque design?

The owner of the mosque’s design is Hussein Pasha Fahmy Al-Mimar, son of Abdel Karim Bey, brother of Muharram Bey. The latter held the position of Governor of Alexandria and married Tafidah Hanim, daughter of Muhammad Ali Pasha. He studied in Egypt and entered the Al-Sawary School there, then was chosen to travel to France on a mission in 1844 to join the Egyptian Military School in Paris, then entered the civil corps department and graduated from it and joined the Higher School of Engineering in Paris.

When he completed his studies, he returned to Egypt during the reign of Abbas I, at the age of 22, and the governor granted him the rank of Emir of Ali. He held several prestigious positions, including director of customs of Alexandria, then governor of Suez, and then an agent of the Endowments Bureau, a job during which he designed the Al-Rifai Mosque and several other buildings. While studying in France under the name of Kojak Hussein Bey, to distinguish him from Hussein Bey, son of Muhammad Ali Pasha, his classmate, he was known as Hussein Pasha Fahmy Al-Mimar, and his death was realized in 1891.

The mosque is an open museum that reflects the history of Islamic architecture in Egypt. The architect wanted to display his skill and art, so he remembered all the known architectural and artistic elements in the Islamic architectural record: the transition areas of domes, the magnificent muqarnas that bear them, the tall capitals of columns, the vaulted incomes and chests in the facade, the lintels and the buttoned contracts. Or the Al-Mashaqa, which takes the form of intertwined plant leaves above the openings of doors and entrances, is characterized by Mamluk art, and its wooden mihrab is an art piece that tells the story of Mamluk art with the artistic taste of the nineteenth century. The pulpit and its front, shields, candies, and jewels were inlaid with pieces of ivory and mother-of-pearl, as well as the Mamluk taste in its bishops, which were divided into squares and crocodiles and lined with a layer of blue lapis lazuli.

The entrances to the mosque are tall and surrounded by stone and marble columns that end in Arab capitals. The facades are decorated with copper windows. The western side is the royal entrance, characterized by stone columns with ornate marble bases. On the seaside of the mosque, there are six doors, 4 of which lead to the burial chambers of the princes and kings of the upper family. The first of these rooms were the tombs of the sons of Khedive Ismail.

The mosque’s layout and architectural style are comparable to the churches of Hagia Sophia and the Christian cathedrals in Rome, according to a press statement by the Director General of Archaeological Research and Studies at the Ministry of Tourism, Dr. Abdul Rahim Rihan.

The tripartite division of most parts of the mosque reflected the idea of ​​dividing the basilica, which began in Islamic architecture in the Umayyad era. The mosque is considered one of the first buildings that used cement in its construction in the history of Islamic architecture. This was an indication of the transition to the modern era.

The qibla gallery is a square area covered with a dome with muqarnas, resting on four shoulders in the corners of each of the four marble columns with carved and gilded capitals. The crown is surrounded by wooden ceilings decorated with gilded inscriptions, and the mihrab in the middle of the eastern wall is covered with colored marble. The taste of the large pulpit adjacent to the mihrab is filled with teeth and ebony. And walnut wood.

Al-Rifa’i Mosque is rectangular in shape, measuring 6,500 square meters. About 1,767 square meters of this area is reserved for prayer, while the rest is the mausoleum of the royal family Mohamed Ali.

The Mausoleums of Al-Rifai Mosque:

In the third room are the remains of King Farouk. He was forbidden to be buried in the Al-Rifai Mosque during the era of the late Egyptian President Gamal Abdel Nasser. He was allowed to be moved during the period of President Muhammad Anwar Sadat. It is noteworthy that the tomb of Jananiar Hanim, sister of De Lesseps, the architect of the Suez Canal, is also present in the mausoleums due to her being the wife of Khedive Ismail.

The mosque also has the tomb of Muhammad Reza Pahlavi, the last Shah of Iran, who spent the rest of his life in Egypt after the collapse of the Shah’s rule after the Islamic Revolution in Iran in 1979, and President Anwar Sadat ordered his burial at Al-Rifai Mosque after his death in 1980. A marble composition was placed on the grave. The Sassanid emblem of the Pahlavi state is painted on it, and next to it is the name of the Shah in Persian.

According to the Ministry of Tourism and Antiquities website, before the death of Muhammad Reza, his father, Reza Shah, was buried in that mausoleum for a short time. Still, the remains were returned to their country after the end of World War II.

Don’t miss to check out our article about Islamic Cairo