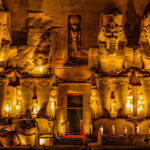 The sun aligning on the face of King Ramses’ seated monument to commemorate his birthday on one day and his coronation on the other is an unusual phenomenon that occurs twice a year; here, you’ll find all you need to know about The Temples of Abu Simbel.

If you are looking for a fantastic experience that you will never have in Aswan, check out our packages Aswan Tours

Where are The temples of Abu Simbel located?

The Abu Simbel Temples are located On the western side of Lake Nasser, 300 kilometers (186 miles) south of Aswan.

Why were the temples of Abu Simbel constructed?

The twin temples were constructed to honor the monarch and his queen Nefertari and mark his triumph at the Battle of Kadesh.

Who discovered the temples of Abu Simbel?

The temples were eventually covered in sand and undiscovered until Swiss explorer Johann Ludwig Burckhardt found them on March 22, 1813.

However, an Italian, Giovanni Battista Belzoni, was the first to investigate them in 1817.

These twin temples have become famous since the sand was eventually removed in 1909, making them the most prominent sites in southern Egypt.

How would the Abu Simbel Temples appear?

There are two temples. Ramesses II’s temple, the Great Temple, is the first; his wife, Queen Nefertari, is the subject of the second temple, the Small Temple.

The temple’s facade is the only one of its kind, with four colossal statues 20 meters high depicting Pharaoh Ramses II sitting on his throne.

On the sides of each sculpture, two more miniature figures represent his mother and his favorite wife Nefertiti, and between the legs are some of his children.

It was devoted to the gods Amun, Ra-Horakhty, and Ptah as well as to the Great King Ramesses himself and is also referred to as the Temple of Ramses II.

One of the most beautiful in Egypt, it is usually regarded as the largest and most magnificent of the temples built under Ramesses II’s rule.

Four 20 m tall enormous statues, each of which depicts Ramesses II seated on a throne, flank the entrance to the Great Temple.

Upon entering the enormous temple, one finds several rooms honoring Ramses and significant members of his family.

Except for two days a year, the sanctum sanctorum’s final room is always black.

This was not accomplished by accident; instead, it required a thorough understanding of science, mathematics, architecture, and astronomy.

The goddess Hathor is honored in the second temple, known as the Small Temple.

It was created to honor Nefertari, Ramses’ favorite wife, despite being considerably smaller than the first.

The queen and the pharaoh seem to be on equal footing, and the Temple of Hathor and Nefertari is another name for it.

What happened to one of the statues at Abu Simbel?

According to the number of provinces in Upper Egypt, there were originally 22 statues.

Given the differing stone quality in this mountain area or the powerful earthquake that devastated Egypt in 27 BC,

it is most likely that the head of the second statue from the left fell many centuries ago.

The terrace of the temple was destroyed when the head fell. However, the northern deck was in fair shape.

It also eliminated some statues of the pharaoh and one of the Falcon gods.

And only this portion of the structure was constructed without being severed from the rock.

The sacred boat of the god Amon was positioned on a granite block in the temple’s sanctuary during rituals.

The chamber was constructed with considerable architectural ability and craftsmanship. 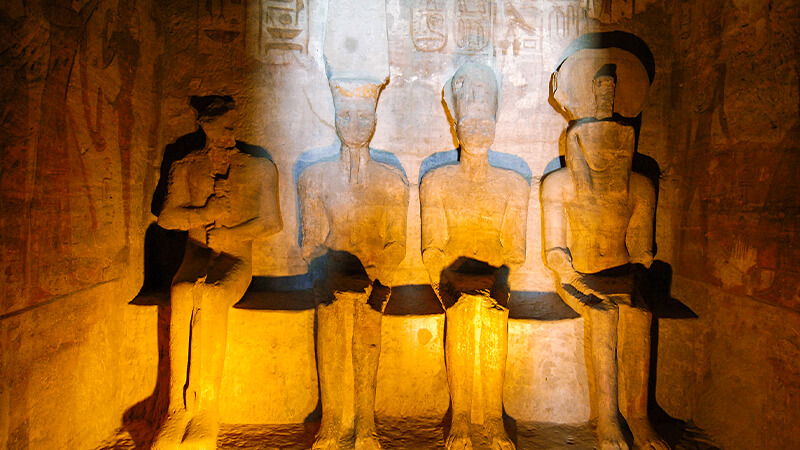 Sun aligns with the Ramses II Temple at Abu Simbel twice a year;

the sun shines in the deepest parts of the more significant temple because it is aligned with the sun,

illuminating a statue of Ramses and the gods to whom the temple is dedicated.

On February 22, the anniversary of accession to the throne, and on his birthday, October 22, the ancient architects positioned the temple such that sunlight entered the room.

On these two days, the sun rises, illuminating the sanctuary’s four statues and the temple’s passageway.

The first three statues depict Ramses II of Egypt, Ra (the sun deity), and Ammon (the king of the gods).

Because Ramses believed himself to be a god, like the other pharaohs, he was grouped with the gods.

Because Ptah, the deity of darkness, is represented by the fourth statue, it is still under its shadow. Over 3,200 years have passed since this statue last saw the light of day.

How are The temples of Abu Simbel reached?

Although Abu Simbel is several hours’ flight south of Aswan, most visitors reach there by plane.

Two daily flights from Aswan take about 30 minutes, and they are scheduled so that visitors will have about two hours to explore the temples.

Additionally, you can travel to Abu Simbel by taking a Lake Nasser cruise.

These ships dock right in front of the temples so visitors can view them at night and in the early morning.

It is a UNESCO World Heritage Site

The most well-known structure in Egypt after the Giza Pyramids is the Abu Simbel Temples, located south of Aswan along Lake Nasser’s shore.

These enormous rock-cut temples, known as the Temple of Ramses II or Ramesses II, marked the southern frontier of the Egyptian Empire, with Nubia at the height of its glory during the New Kingdom. Ramesses II, the greatest of the pharaohs, built them.

They were created to make everybody who saw them feel the power of Egypt’s kings. The most extraordinary sculptures from the prehistoric Pharaonic era still exist, and these are the four statues that guard the entrance to the larger of these temples.