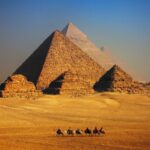 What are the 3 Pyramids of Giza inside the pyramids of giza?

Inside the pyramids of giza The word pyramid comes from the Greek:

Pyramis πυραμίς in the plural pyramidis, indicating a wheat flour cake, which had the shape of a pyramid.

Some historians believe that the Greek word itself comes from the Egyptian word per-em-us which, in the Rhind papyrus.

Explore our Cairo Day Tours to know more about the pyramids of giza.

Information you want to know about Coptic Cairo

Take the Opportunity to know more about Ben Ezra Synagogue

Four sides have smooth edges that connect the base to the summit, where the pyramid located.

The Pyramids of Giza in Egypt

To the royal vault and the building of monumental mud-brick constructions, the mastaba,

These structures became more and more complex, both internally and externally,

They transformed into Inside the pyramids of giza shape that we know today.

By inserting them in large enclosures intended to serve their funerary cult.

We then speak of a funerary complex, or pyramid complex, where the pyramids, that of the King,

Those of the Queens and other buildings useful for the worship of the sovereign, will house.

It was with King Djoser (2628-2609, 3rd dynasty) that the architecture of the royal tombs was to take on this new impetus,

Bringing together in a single complex these hitherto distinct elements and giving the funerary monument an unparalleled scale.

Also, the constructions built in stone, which represented a real technical revolution.

Throughout this period it seems certain, because of the discoveries of the Texts of the Pyramids,

That this architecture responded to precise codes, skillfully thought out and then inscribed in the very stone of the tombs

In order to add eternal writing to these stone constructions intended to ensure the immortality of the King. 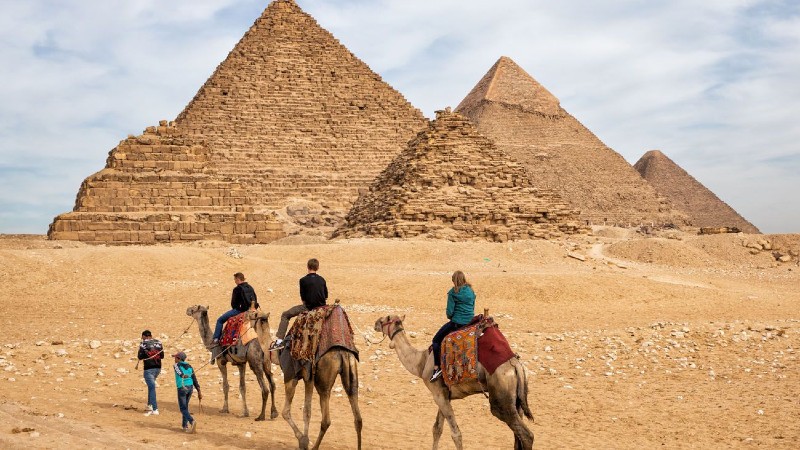 Where are the pyramids of Egypt located?

The pyramids show, for their time, the great knowledge of Egyptian engineers capable of raising

Such monuments with very rudimentary means, Quick tour in City of Memphis Egypt

It must emphasize that today, although many specialists make their (sometimes fantastic) deductions,

We have no idea how such monuments built, with precisely what tools,

How the ancients mastered such geometrical perfection, how they transported and hauled materials, etc.

The methods of construction Inside the pyramids of giza, therefore, remain very uncertain and the archaeological data

Hence the theories that flourish and multiply, especially since the end of the 19th century.

Hundreds of works devoted to the Khufu Pyramid, for example,

All claim to have finally managed to unravel the mystery surrounding its construction.

The theories generally focus on this King’s Great Pyramid, on the assumption

That a method that can explain its construction can also apply to all the other pyramids in the country,

Which is far from certain, since there is no evidence that the same methods were applied to all buildings,

Regardless of their type, size, and age. The only thing that can observe is the evolution of the monument in terms of its structure.

Get an information about The Grand Museum Egypt

So there are many different kinds of pyramids. 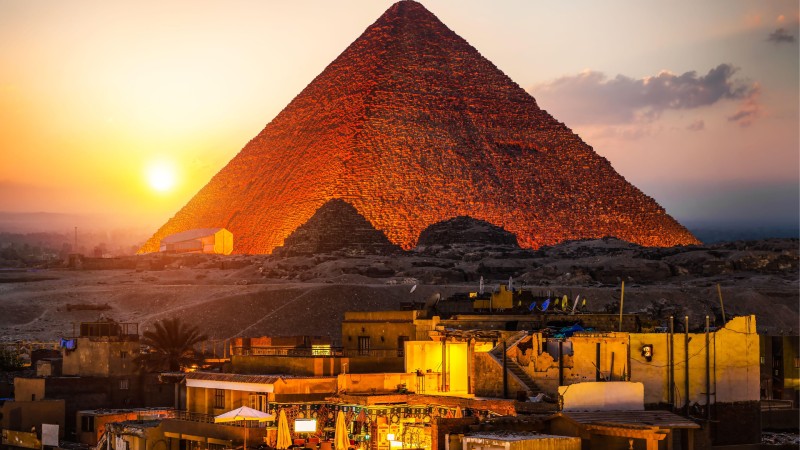 The mastaba – South of Saqqarah

The mastaba Inside the pyramids of giza was a funerary building used as a burial place for the rulers of the first two dynasties,

As well as for high dignitaries, Hurry up to find out Egypt Travel Packages

The half-buried remains of these enigmatic constructions reminded

Arabs of the 19th century of the famous benches commonly placed in front of modern homes.

This is why they named them mastabah, an Arabic word meaning “bench”.

Externally, a mastaba is a rectangular construction with mud-brick or cut stone walls,

First straight and then gradually sloping slightly inwards like the base of a pyramid.

The walls of this room, parallel to the outer walls of the mastaba, may covere with scenes from the daily life of the deceased.

On the wall, facing the door engraved a false door that symbolically leads to the kingdom of the dead,

Designed to facilitate the return of the deceased to the kingdom of the living.

A well, starting from the top of the mastaba,

Goes down into the ground and leads to the burial chamber where the deceased rests in his sarcophagus.

Mastabas are often family tombs, so there are several wells and sometimes even several vaults in the same well,

Inside the pyramids of giza Dug at different depths. 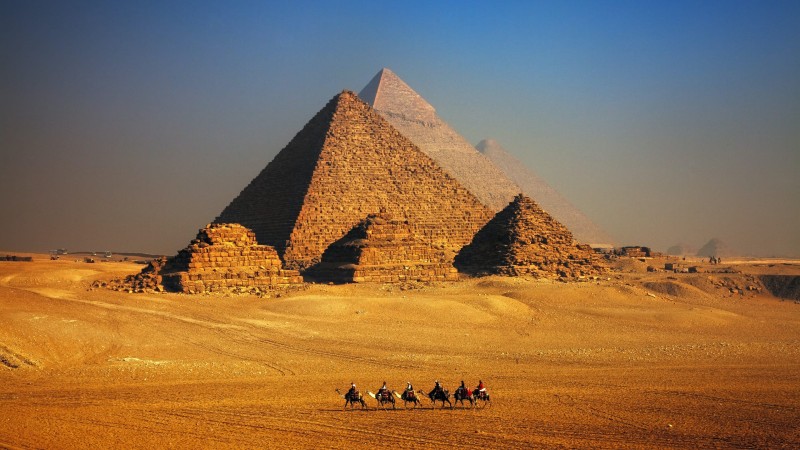 The Step Pyramid Inside the pyramids of giza

At the beginning of Dynasty III (2647-2575), the mastabas became structures know as Step pyramids.

They resemble a giant staircase on all four sides.

In fact, the ancients, starting from their two-story mastaba, You can also read about Egypt Desert Safari

Continued the evolution by superimposing on each other large additional rectangles (or mastabas),

The widest at the bottom, the smallest at the top, giving this aspect of the step pyramid.

The Rhomboidal or Double-Sloped Pyramid was the next structural evolution.

Its peculiar shape makes it an abortive attempt to build a pyramid with smooth faces, the last stage in the evolution of pyramids.

It has many particularities and resembles in many ways the future pyramids with smooth faces.

It has two entrances, one of which not located on the north face, a unique feature in the Old Kingdom and still retains most of its cladding,

Making it one of the best-preserved monuments in all of Egypt, Egypt Nile Cruise in details

Unique in the country, the double-sloped pyramid is in fact the result of a modification of the structure under construction.

That the foundations were too fragile to support the mass of stone.

The rhomboidal pyramid in Dahshur

The pyramid with a smooth face The Smooth-faced Pyramid, or Straight-Sloped Pyramid,

Is the ultimate version of the architectural evolution of the pyramids.

Many smooth pyramids are step pyramids that the workers have hidden by adding the exterior facing.

The best know are those of Meidum, Gizèh, Dahshour, Abousir.

The pyramids with smooth faces are considered a significant technical evolution in the architecture of ancient Egypt.

The first smooth-faced pyramid built by King Snefru in Meydoum.

He completed the monument that his predecessor had probably initiated

By making a bold transition from a step pyramid to a true classical pyramid,

Thus giving the monument’s shape an abstract beauty that will characterize all such monuments built thereafter.

After the traditional stepped funerary monuments of Saqqarah,

This pyramid marks a new stage that will lead to the pyramids with completely smooth faces.

That of Meidum is the second largest pyramid to have built.

Khufu Pyramid at Giza Inside the pyramids of giza

From this last attempt will be born the pyramids of Gizèh which will reach perfection in the art of this construction.

Covered with very fine limestone giving them a smooth appearance.

The last stage in the evolution of the pyramids with smooth faces is to find in Nubia and Sudan,

Where the pharaohs of Napata, then of Meroe, built monuments whose much steeper angle gives them

Amore acute aspect and will moreover become a characteristic of this civilization of ancient Sudan.

The private pyramid Inside the pyramids of giza

Inside the pyramids of giza appeared when the Kings and Queens no longer used the pyramid,

At the beginning of the New Kingdom, around 1550, the officials and craftsmen of Dayr al-Madina took this form.

These are very small pyramids, made of brick and plaster, surmounting the burial vault. Enjoy all the latest slots live online, with the best graphics and https://casinodulacleamy.com/ action available.

The best know are those of the workers’ village at Dayr al-Madina and date only from the New Kingdom (1549-1080).

Inside the pyramids of giza was the last Egyptian pyramid and dates from 30 B.C. and lasted until the 4th century A.D.

In conclusion, It built in brick in the oasis of Dakhla, on the site of Amheida, a very important Greco-Roman urban area.