Sphinx of Giza Facts is one of the many monuments that we consider to be one of the icons of ancient Egyptian civilization. It is located northwest of the valley temple. It is nicknamed by the Arabs “Abu al-Hôl” “father of terror”. The term sphinx would come from the ancient Greek: Σφίγξ (Sphígx), meaning “to strangle”, itself derived from the Sanskrit “sthag” meaning “concealed”. Another interpretation gives the origin of this name from the ancient Egyptian “Shesepânkh”, which means “living statue”. In front of the sphinx, an open structure was erected. This structure seems to be very closely related to the Sphinx and archaeologists consider it to be its temple. But the precise function of this structure is still not clear, even today. 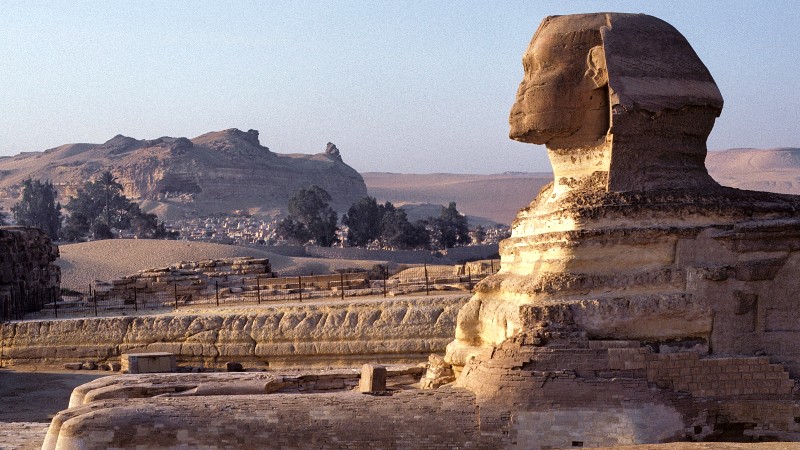 The builder of this work also remains the subject of heated discussion today. Some specialists attribute it to Djédefrê, while for others it was King Khafrê (or Khephren). In the same vagueness, since no one has any formal proof, we also find King Khufu (

r Khufu)? The sphinx was carved directly from the natural rock because it is in the middle of a large quarry that provided the blocks for the construction of the pyramid. The stretched legs were added in masonry. A thorough geological study of this structure and the neighboring temples indicated that the large blocks that were used to build the valley temple were most likely extracted from the layers that covered the upper part of its body. This means that it was carved almost at the same time as the valley temple was built.

Originally, his face and body were to be completely covered with plaster painted red. The Nemes was to be in blue and yellow. But archaeologists date the traces of paintings found on his face to the New Kingdom. It is 20 m high, 73 m long and 14 m wide. It is not only the oldest but also the largest sphinx and one of the largest statues ever built in Egypt. The sphinx is a combination of the body of a crouching lion with the head of a human. The head bears the Nemes and is adorned with the uraeus, the two typical royal emblems. The human head is supposed to represent the head of the king who built it. The lion was not only a symbol of power but also a symbol of the solar cult. There is a significant difference in the proportion between the size of the head of the great sphinx compared to its body.

This has led some specialists to assume that the head we see today was re-sculpted from the original head. This difference in proportion may also be due to the fact that there are several natural cracks running along the body of the sphinx, the largest of which cut directly into the thinnest part of its body. This would have forced the sculptors to extend the body, making it disproportionate to its head. The head has long been identified with Khafrê, but some specialists suggest that it may, in fact, represent his father, King Khufu (or Cheops).

The monument is said to have been erected by Djédefrê (2528-2518), another son of Khufu to the glory of their father. They put forward several clues to support this theory of a geological, artistic, etc… order. The debate remains open for lack of indisputable evidence in one or the other of the opinions. Throughout its long history, the sphinx was subject to much degradation, especially due to erosion caused by the sand that covered the whole body. Several times, it was de-sanded: Auguste Edouard Mariette in 1853 and the last time in 1925. The false beard, which he had in the past and which was used to support the head, was destroyed by cannon shots ordered by a very “clever” Sheikh in the 14th century. Fragments of this beard are now in the British Museum.

Although many stories have been told about the nose of this statue, we don’t really know when it was lost, maybe during those cannon shots? Drawings made by European travelers in the 16th and 17th centuries almost invariably show the face of the sphinx with the nose. But the final copies of these diagrams were made by people who had never seen the sphinx in real life, which does not make them very reliable.

During Napoleon’s expedition to Egypt in the 19th century, where the drawings of the sphinx are faithful to the original, the nose is already missing. Part of the right shoulder collapsed in 1988 and restoration work took place in 1989. But since April 2006, a new complete restoration of the sphinx has been undertaken. 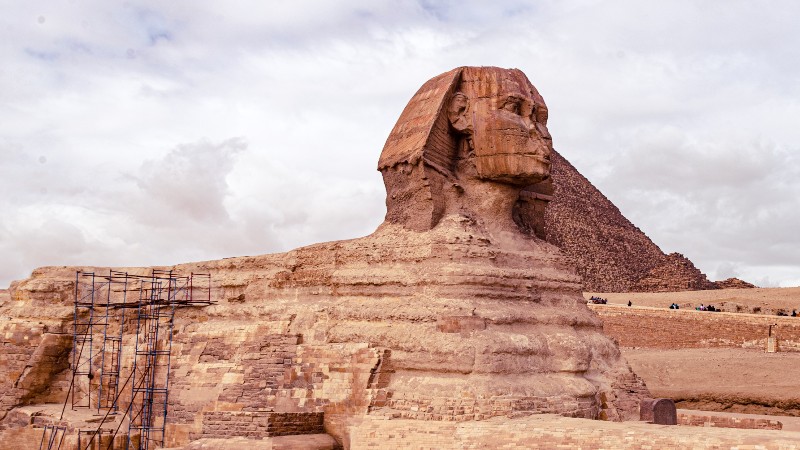 A pink granite stele called: “Dream Stele”, was erected between the front legs of the sphinx by Thoutmôsis IV (1401/00-1390). On this stele, the King recalls how, when he was only a young Prince, he fell asleep at noon after a hunting party in the shadow of an ancient statue, buried in the sand. The solar God entered his dreams and spoke to him as a father would speak to his son, saying: “Look at me, O my son Thutmosis, I am your father, Horemakhet-Khépri-Rê-Atom.” …a deity that has since been associated with the Sphinx.

God promised the Prince “To give him kingship on earth, at the head of the living, and to make him wear the white crown and the red crown on the throne of Geb”. In exchange, the young Thutmosis was to free this statue from the sands. The Prince obviously obeyed the will of this God and as a reward, Thutmosis IV was the next King. His father, Amenhotep II (1428/27-1401) had already built a small temple for the Sphinx in the north-east of the city. In this story, what is certain is that in the middle of the 18th dynasty, the sphinx was indeed buried in the sands and then already cleared.

The temple of the sphinx

The temple was erected to the east of the great sphinx and it juxtaposes the north of the valley temple. Geological data suggest that this temple was built with blocks that were extracted from the same rock as the sphinx, indicating that both were built at approximately the same time. Because of its position, it is clear that it was specifically dedicated to the great sphinx. But since we lack contemporary texts at that time, the precise function of this structure is still uncertain.  This lack of documents can, perhaps, be explained by the fact that the temple of the sphinx was never finished: the exterior was left without the usual granite covering. Unfinished, it is possible that the Priests never practiced any worship in this temple.

The most recent traces of a cult dedicated to the Great Sphinx date from the 18th dynasty, when a small temple was erected north of the Sphinx Temple. Today, the sphinx is seen as an image of the Sun God and it is tempting to believe that this was also its original meaning as well as that of its temple, but there is nothing to support this theory.

Although the temple was built long before the great sphinx, it is clear that the two are connected. Another hypothesis makes the sphinx the representation of the King returning from the kingdom of the dead to bring offerings to the rising sun, which he faces. The structure of the temple is relatively simple. It is an almost rectangular building with a double entrance in its eastern façade. Its main location is a large open courtyard, which like the courtyard of the funerary temple, has a number of huge pillars in front of which ten colossal statues of the King were placed. The temple has two sanctuaries, both along its central axis. The two sanctuaries were built opposite each other, one to the east and one to the west. Their orientation suggests that these shrines were probably consecrated at sunrise (East) and sunset (West).