Hurghada Egypt is the administrative capital of the Red Sea Governorate, and it occupies an area of ​​40 km from the coastal strip of the western shore of the Red Sea. It is bordered to the north by Ras Ghareb, to the south by Safaga, to the east by the Red Sea coast, and to the west by the Red Sea mountains. It is located in the islands of Jiftun, Umm Qamar, Magawish, Abu Ramada, Abu Minqar, Al Fanadir, and Shadwan, and its most famous resorts are El Gouna, Sahl Hasheesh, Soma Bay and Makadi Bay, and its main neighborhoods are in the Al-Dahar neighborhood, the Al-Seqala neighborhood, and the neighborhood.

Hurghada Egypt originated in 1905, and the city previously included only a group of primitive homes inhabited by the Bedouins, who were mainly stationed in the Al-Sakala area to work in fishing and pearls, which earned the city a Bedouin character that continues with it until now.

Hurghada today, has become the main tourist center of the Red Sea coast and an international center for water sports. You will find in Hurghada all kinds of water sports such as windsurfing, sailing, deep-sea fishing, swimming, but especially snorkeling and diving. The only underwater gardens offshore are among the best in the world, rightly famous among divers.

The warm waters here are ideal for many varieties of rare fish and coral reefs, which can also be observed through glass bottom boats. This area has many elegant accommodations, offers a warm welcome and efficient service. The restaurants are mostly along the main road. While in Hurghada, don’t miss the museum and aquarium, with their complete collections of Red Sea flora and fauna. Today Hurghada is known as a city of entertainment, especially among Europeans. Locals and others will tell you that life starts at night in Hurghada, with many, many clubs.

They are particularly popular with young people, but certainly many others of all ages. Often it is possible to find an exciting party focused on visitors from a group of tours that maybe enjoy themselves in a particular bar. The bars are easy to find along the main street, along with a lot of cheap and expensive hotels. It is also a seaside resort, where thousands of Europeans and others come with their families to enjoy the sun and the fun of private beaches, some are all-inclusive. Many of these hotels offer so many activities and services that you never have to leave the resort.

Often, larger resorts have zoos, playgrounds, discos, bars, many swimming pools, and even small theaters. Hurghada is also a developing city. Many new hotels and buildings are under construction and we can expect to see some new hotels, restaurants, and other facilities soon. Actually, this is a busy section of the Red Sea in general. Safaga is just south of Hurghada and Soma Bay with its beautiful Sheraton is even closer to the South.

To the north is El Gouna, a highly organized resort community. Together, these communities and resort areas offer pretty much everything a visitor could want, from exciting parties to isolated scuba diving, with golf, bowling, and fishing in between.

Due to its coastal nature, the city has always been a domestic and international tourist destination visited by thousands of tourists annually, and its economy relied mainly on tourism and its complementary activities, and with it, the majority of the city’s residents work. This predominant activity affected the nature of the city negatively due to the political turmoil in Egypt. The city’s visitor circle includes many nationalities, most of which are European tourists from Russia, the Netherlands, Slovakia, Britain, and Germany, as well as tourists from the Arab Gulf countries. Most tourists spend their morning in the morning swimming and lying in the sun by the pool or on the beach, while they spend their nights in night clubs, especially those in El Gouna, while some are attracted to various marine activities such as diving.

Hurghada Egypt covers an area of ​​40 km from the coastal strip of the Red Sea and is characterized by its bright sun throughout the year and its wonderful coral reefs, in addition to dozens of interesting attractions that tourists turn to for relaxation and comfort because of the city’s attractions, including moderate temperatures throughout the year, and its desert climate. Al Jaf and its activities include beach fun, fun water sports, clubs, and golf courses. It is also abundant with many islands and marine sites that are considered a kiss for scuba diving and water sports enthusiasts, including the reefs of Belinda, the reefs of Abu Nakhra, the reefs of Abu Nahhas, the reefs of Umm al-Ush, the reefs of Umm Qamar, the reefs of Arrouf, the long reefs, Abu Naqad and Siol.

Soma Bay Resort or Abu Soma Bay joined the Hurghada city space in April 2015. It is a tourist community located 60 km from the northern end of the city of Hurghada, the resort extends over an area of ​​13 million meters to form a beautiful bay of the features covered in the beauty of the virgin nature. The resort enjoys self-sufficiency, urban and architectural planning, and the quality of services that merge with the surrounding area with a European touch in the form of hotels, villas, places for sport, hospitalization, and recreation owned by Egyptian and Arab businessmen. The resort includes three main sites: “Sheraton”, “Residence de Cascades” and “Robinson Club” in addition to a golf club. 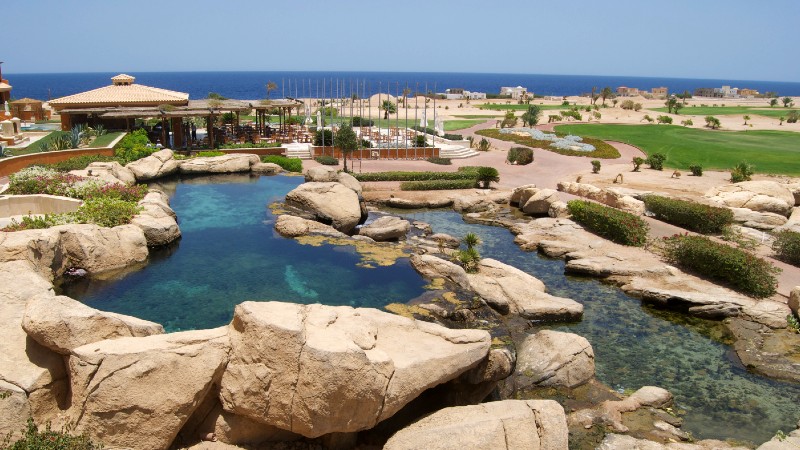 Makadi Bay Resort or Makadi Bay joined the Hurghada city space in April 2015. It is located 35 km south of downtown Hurghada. The resort enjoys bright sun all year round, beaches extending from the clear sea and natural white sand, and it is one of the ideal resorts of Hurghada for holidays and cruises where the temperatures range in the resort between 15 to 23 degrees Celsius in the winter months, and between 23 degrees to 34 degrees In the summer and spring months. The resort is designed to meet the needs of different tourists, as it includes a group of hotels, restaurants and luxurious lounges that work to provide an international service that includes a selection of Asian, French, Italian and Japanese cuisine. 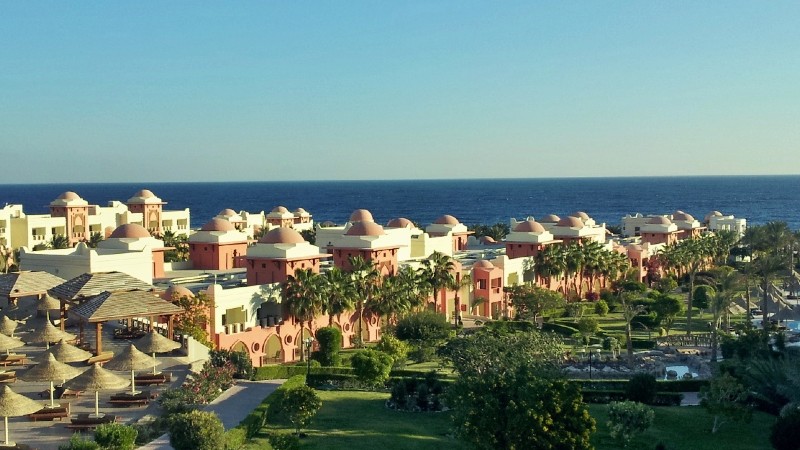 This site also bears the name “Aquarium”, and is characterized by its relatively shallow waters and to a large extent flat, and teeming with amazing and varied marine life where there are many reef fish, stingray and tiger shark, in addition to jack, barracuda, coral reef with white fin and small tuna In large numbers. 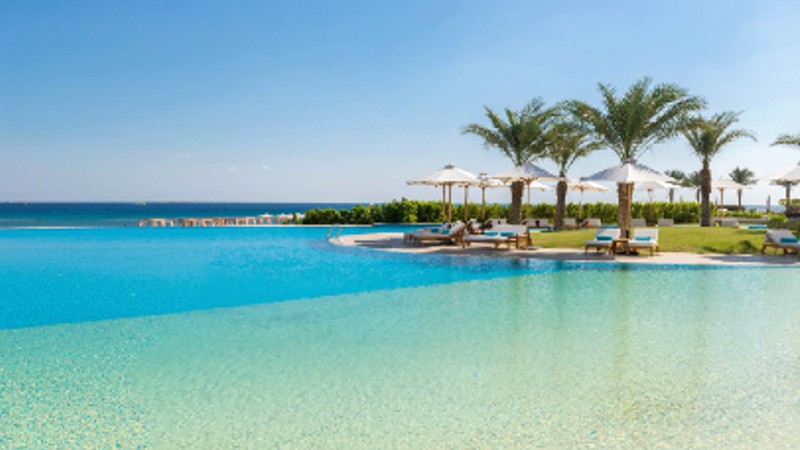 The origin of El Gouna dates back to 1990, when Orascom Hotels and Development Company developed it on a group of islands as one of the tourist resorts located on the Red Sea coast, away from Hurghada Egypt International Airport 22 km to the north, and separated from Cairo by 470 km. El Gouna tends to achieve self-sufficiency in food by relying heavily on the products of El Gouna Farm, which is located on an area of ​​120 acres, which provides the resort’s needs of vegetables, fruits, meat, poultry, and fish without using pesticides. The area is famous for being a site for diving in the depths and various water sports, and there are two main beaches are «Olive Beach» and «Mangrove Beach», and the resort is punctuated by a large number of water channels, and there are 6 neighborhoods, which are «Marina Town», «Mediterranean District», “Golf District”, “Nubian Quarter”, “Hadaba District”, and “Italian Quarter”. All investments in the resort are directed to rely on clean solar energy and dispense with the electricity generated by the government entirely, by storing the batteries for the energy generated by the solar cells. The product is the ideal model for golfing, diving, water skiing, windsurfing, and kites, and has many health clubs and five-star hotels, as well as scenic and fun weather throughout the year. 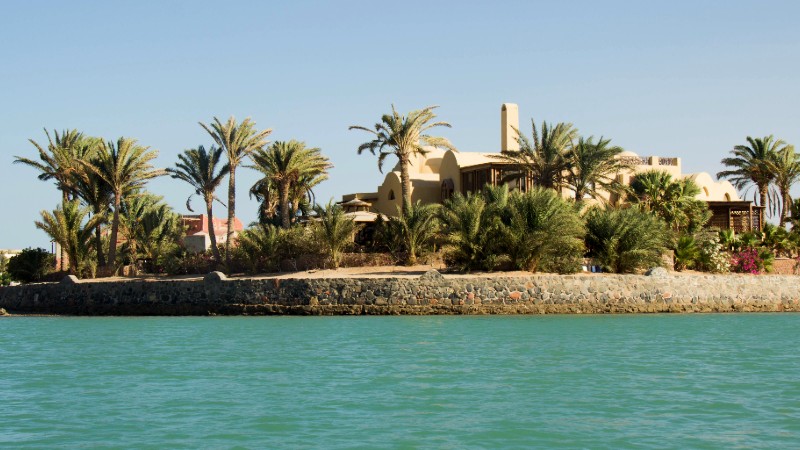 Giftun Island located 11 km from the beaches of Hurghada, and its area is more than 17 km. The island is the most popular tourist within the scope of the city of Hurghada because it owns a special style of beaches, dozens of tourists come every day to spend a day in the middle of the Red Sea. It is the most important place for deep diving and snorkeling in Hurghada and is used by more than 30% of the sport’s practitioners and guests in its hotels. It is also considered one of the most important sources of income for the Red Sea reserves, and it plays a major role in the tourism and investment growth in Hurghada, as it is the only island on which tourists are allowed. The geological nature of the island is predominantly elevated in its northern half, where there is a hillside with a level above 119 meters above sea level extending from the north to the middle of the island. As for the southern part of the island, it is a plateau of coral rocks whose level ranges from 3 to 6 meters and surrounds its coastal coral reefs and extends to the west to Abu Minqar Island and to the south to the small island of Giftun, and the water between the islands and the opposite coast is shallow water that does not increase its depth At 20 meters below sea level, while the bottom deepens to the east of it, the depth ranges between 300 to 500 meters below sea level. And its rocks are formed from sedimentary rocks where the sediment thickness reaches about 120 meters, most of which are made of sandstone limestone rocks and coral reefs that belong to the Pliocene era. The island represents a natural reserve that is considered one of the most important places that contain sensitive environmental systems that include marine weeds, and it is characterized by cladding and high diversity of coral reefs ranging between 60% to 90% in distinctive places, and it is inhabited by large numbers of marine animals and birds, some of which are considered endangered, such as eagle eagles and gulls With white eyes (Al Ajma), which nesting on the island, as there are in the northern and eastern region, including places for nesting turtles, especially the hawksbill turtle. 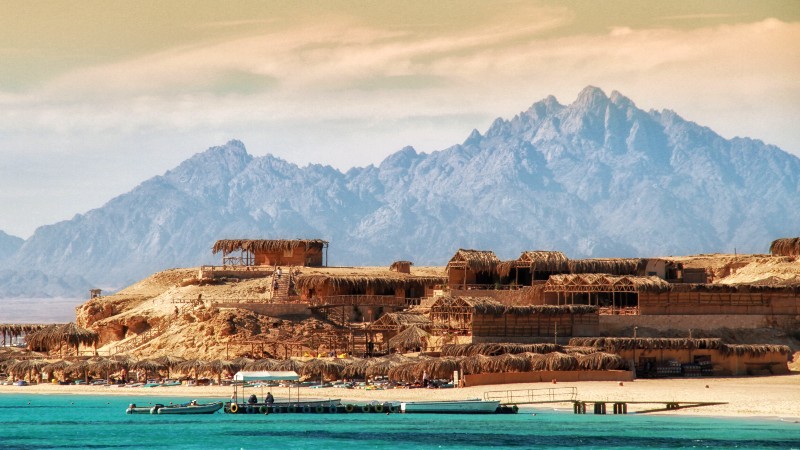 Grand Aquarium or Aquarium is a museum that highlights marine life in Hurghada Egypt and was opened in January 2015, to display a large collection of marine creatures, with the ability to communicate with them and get to know them closely, as it contains more than 22 aquariums of the largest fish tanks in size, It has a 22-meter-long glass tunnel, which gives passers-through a natural simulation of marine life while wandering underwater from inside. The museum project consists of three phases. The first stage was opened with a capacity of more than one million gallons of water to be the seventh aquarium globally in terms of the amount of water, and with the end of the second stage the amount of water in it reaches 3.8 million gallons of water, thus becoming the third globally, and with the stage The last and third become the first “aquarium” in the world with a water quantity of 8.8 million gallons. And participated in the implementation of the project many experts from more than 5 different countries including England, Germany, Malaysia, and China, in addition to Egyptian experts. The project is located on an area of ​​approximately 22 thousand meters, in addition to a parking lot estimated at about 20 thousand meters, and a few minutes away from Hurghada Egypt International Airport.