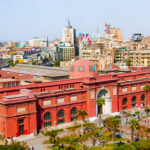 The Egyptian Museum in Cairo opened in 1835 in Azbakeya Park and featured an extensive collection of antiquities. It has since moved its contents to the second exhibition hall in Salah El-Din Citadel, where it remains today. It is one of the largest and most well-known international museums. It is currently situated in Tahrir Square in the center of Egypt’s capital city, “Cairo.” At the inauguration of a museum where he exhibits a collection of artifacts on the Nile shore at Bulaq, French Egyptologist Auguste Mariette, employed by the Louvre Museum, can be seen. The new structure was put in place in the center of Cairo during the rule of Khedive Abbas Helmy II. The archaeological treasures discovered in the graves of the kings and the middle family’s royal retinue in Dahshur in 1894 are the most significant of the museum’s more than 150,000 artifacts. The most extensive archaeological collection in the world that depicts all eras of ancient Egyptian history is currently housed in the museum.

What is the importance of the Egyptian Museum?

One of the world’s most significant and impressive ancient history museums is the Egyptian Museum. Along with grave goods, mummies, jewels, eating bowls, and toys from Egyptians whose names have been lost to history, these objects include Tutankhamun’s treasures.

An extensive collection of ancient Egyptian artifacts can be found at the Museum of Egyptian Antiquities, also referred to as the Egyptian Museum or the Cairo Museum, in Cairo, Egypt. There are 120,000 objects, with a representative number on display and the rest stored away.

Where is the ancient Egyptian Museum located?

The Egyptian Museum is located in the heart of the Egyptian capital, Cairo (downtown), and overlooks Tahrir Square; it is one of the largest and most famous international museums

Before construction, birth, and establishment

The museum’s history began when foreign consuls accredited in Egypt professed their appreciation for ancient Egyptian art and tried to gather and deliver Egyptian antiquities to the major European capitals. As a result, the commerce in Egyptian antiquities grew and eventually became a fad in Europe. Coffins were among the most sought-after gifts from such priceless items during the nineteenth century among the elite. The Europeans’ reasons for caring about the stones on their territory initially baffled the Egyptians. While the tales going around that some of these locations held buried wealth were the main reason, the Egyptians were digging antiquities in temples and tombs.

Muhammad Ali Pasha, who ruled Egypt then, instituted a new strategy with the goal of opening Egypt to the West. The Antiquities Department and the Egyptian Museum were established by an order from Muhammad Ali Pasha in 1835. Yusef Zia Effendi was given charge of running the department under the direction of Sheikh Refa’a al-Tahtawi to take over the responsibility for maintaining historical artifacts. He successfully educated the populace about the importance of antiquities. On August 15, 1835, he ordered the issuance of a decree to outlaw the smuggling and trafficking of Egyptian artifacts in favor of the imperative of maintaining and preserving them. When that time came, the Egyptian Museum was a part of the Al-Alsun School and looked out over the banks of the Azbekiya pool.

The director of the Antiquities Department, Youssef Zia Effendi, started looking over the Middle Egyptian artifacts that farmers had discovered. In 1848, Muhammad Ali Pasha gave the Minister of Education, Linan Bey, a detailed report on the archaeological sites and instructions to bring significant artifacts to the Egyptian Museum. And the collection kept in the museum in Azbakeya started to get smaller until it was moved into a single hall of Salah El-Din Castle. Even worse, on Duke Maximilian of Austria’s visit to the fortress, Khedive Abbas, I gave him the complete contents of that hall.

Until Khedive Abbas gave the directorates the command to strictly supervise foreigners and Egyptians stealing, concealing, and selling antiquities, Egyptian antiquities were still being robbed and destroyed. Until Auguste Mariette arrived, who found the Serapeum’s entrance at Saqqara, carried out nearly three years’ worth of excavations in the Apis calf cemetery, and pushed the government to create an Egyptian Antiquities Department and an Egyptian Museum. Khedive Said named him commissioner of antiquities work in Egypt and the supervision of excavations on June 19, 1858, in exchange for his agreement to create an Egyptian Antiquities Department. When the Queen Iahhotep treasure was found in the Draa Abu al-Naga district of Thebes on February 5, 1859, Mariette began to develop comprehensive programs for archaeological research. She constructed storage for antiquities in Bulaq on the banks of the Nile. And the weapons, which were quite beautiful, inspired Khedive Said to be enthusiastic about opening an Egyptian antiquities museum in Bulaq. It was constructed during the rule of Khedive Ismail and was made accessible for tours in 1863. When it first opened, the museum was housed in a massive structure that overlooked the Nile and was known as the House of Antiquities or Antikhana. However, in 1878, the museum was damaged by the Nile flood, which resulted in the loss of several exhibits with artistic and scientific value.

Mariette viewed the Bulaq Museum as a temporary location. Following the flood incident, he saw a chance to demand a permanent headquarters building for the museum with ample space to house a more significant collection of artifacts and be far from the flood’s course. After Mariette passed away, Gaston Maspero succeeded him. Maspero unsuccessfully attempted to relocate the museum from Bulaq. The overpopulation in the building housing the antiquities collections peaked in 1889 when there were no longer enough spaces for other antiquities, either in the exhibition halls or warehouses. In Upper Egypt, artifacts discovered during excavations were frequently left on boats. Due to this terrible circumstance, Khedive Ismail gave up one of his palaces in Giza, which is currently the zoo’s site, to become the museum’s new location. All the antiquities were moved from the Bulaq Museum to Giza between the summer and the end of 1889, and the scientist de Morgan, who served as the museum’s director, rearranged the objects in the new space. Although Maspero returned to lead the museum from 1899 to 1914, Loret replaced Morgan from 1897 to 1899.

The French architect Marcel Dornon designed the Museum in 1897 to be held in the northern region of Tahrir Square (formerly Ismailia) along the British army barracks in Cairo at Qasr al-Nil. The German Hermann Grabo completed his ministry and the project. In November 1903, the Antiquities Department appointed the Italian architect Alessandro Parazzanti, who received the keys to the Museum on March 9, 1902. It transferred the archaeological collections from Khedive Ismail’s Palace in Giza to the new Museum, a process during which five thousand were used A wooden cart. The vast monuments were transported on two trains that traveled back and forth about nineteen times between Giza and Qasr al-Nil. The first shipment carried about forty-eight stone sarcophagi, weighing more than a thousand tons. However, the transfer process has been marred by chaos for some time. The transfers were completed on July 13, 1902, and Mariette’s tomb was moved to the Museum’s garden in fulfillment of his will, in which he expressed his wish that his body should be housed in the Museum’s garden with the relics he spent a long time collecting during his life.

On November 15, the Egyptian Museum was officially opened. The new Museum was based on a gradual arrangement of the halls. It did not consider the allocation of rooms for periods of turbulence, as they were supposed to be of no historical importance. The Museum’s antiquities were classified according to their subjects. Still, for architectural reasons, the vast statues were placed on the ground floor, while the funerary crypts discovered on the first floor were displayed according to the historical sequence. Every day, antiquities were placed and assembled in several rooms according to their themes. And it became the only Museum in the world stacked with antiquities to the point that it became a storehouse. When Maspero was asked about the reason, he replied that the Egyptian Museum is a picture of the tomb or the pharaonic temple, as the artist used every part of it to put a painted painting or hieroglyphic inscriptions, and even the modern Egyptian house in that The time was when images and pictures were placed so that every part was exploited on the wall, meaning that the Museum was a picture of the current and ancient Egyptian.

This group represents the civilizational product of the Egyptian man before the knowledge of writing, which settled in many places in Egypt in the north, center, and south of the country. It includes different types of pottery, ornamental tools, fishing tools, and daily life requirements.

It includes the antiquities of the First and Second Dynasties, such as the Narmer Pavillion, the Khasekhemwy statue, and many utensils and tools.

It includes a group of antiquities, the most important of which are the statues of Zusru Khafre, Menkaure, Sheikh of the country, the dwarf Sanab, Bey I and his son Meri-An-Ra, many coffins, statues of individuals, murals, and the collection of Queen Hetepheres.

This group includes many antiquities, the most important of which is the statue of King Mentuhob II, a group of statues of some kings of the 12th dynasty, such as Senusret I, Amenemhat III, and others, and many figures of individuals, coffins, ornaments, and tools of daily life, and the pyramids of some of the pyramids of Fayoum.

The era of the New Kingdom

It is the most famous group of artifacts, including the collection of the young pharaoh Tutankhamun, the statues of Hatshepsut, Thutmose III, and Ramses II, in addition to the war wheels, papyri, ornaments, Akhenaten collection, the painting of Israel, the statues of Amenhotep III and his wife T, a group of amulets, writing tools, and agriculture, then the collection of royal mummies that display In its hall, which opened in 1994.

The group includes a variety of antiquities, including the treasures of Tanis, which represent some antiquities made of gold, silver, and precious stones, which were found in the tombs of some kings and queens of the 21st and 22nd dynasties in San el-Hajar. This is in addition to some essential statues such as the statue of Amun and Monument, the statue of the goddess Tawert, the Canopus decision (Abu Qir), the Bankhi painting, and a group of Nuba antiquities, some of which were transferred to the Nubia Museum in Aswan.