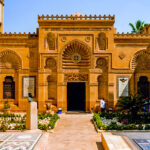 Where is Coptic Museum located?

This museum is situated within the limits of the Babylonian fortification in Coptic Cairo, which still stands behind the museum building in ancient Egypt.

Establishment of the Coptic Museum:

To fill a hole in the documentation of Egyptian art and aid in the study of the history of Christianity in Egypt, the late Mark Samika (Pasha) founded the Coptic Museum in 1910.
Mark Pasha Samika pushed for the inclusion of the gathering of Coptic artifacts in the objectives of the Committee for the Preservation of Antiquities and Arts in 1893. The current museum building was established by this person after years of struggle and was opened in 1910. He was also named the museum’s first director and was published in 1930 as the museum’s initial guide.

The museum was created in 1910 by Morcos Simika Pasha to gather the data needed to examine the development of Christianity in Egypt, and he completed this task successfully. Egypt had several museums at that time, including the Museum of Islamic Art in Cairo, the Greco-Roman Museum in Alexandria, and the Cairo Museum of the Ancient Pharaonic.

The museum was constructed on property that belonged to the Coptic Church and was voluntarily given to its founder, His Holiness, the late Cyril V. (who died in 1927 AD, followed by Anba Younis, the nineteenth, in 1929 AD).

In 1984, construction on the completion of the Coptic Museum’s new and old wings and the Hanging Church was completed.

The main sections of the Museum:

This museum is the largest in the world for the antiquities of Egypt from the Coptic period, and it includes the following sections:

The number of holdings in the Coptic Museum is about 16,000. The museum’s holdings were arranged according to their qualities into sections that presented a scientific presentation in which the chronological arrangement was as much as possible.

The museum’s old wing includes a set of wooden furniture and inlaid doors. It also consists of the door made of sycamore wood for the icon-bearing church of St. Barbara. The panels are recognizable, as they were installed in the Fatimid era during the eleventh and twelfth centuries.

The new wing contains a collection that shows various types, models, and themes, such as geometric designs, acanthus leaf scrolls, and vine leaves, friezes decorated with rabbits, peacocks, birds, and rural activities, passing through the Hellenistic and Coptic heritage to the Islamic artistic formulas in Egypt. Manuscripts of the Bible date back thousands of years and are architectural masterpieces.

The average number of visitors per day ranges from 200 to 250 people of different nationalities.