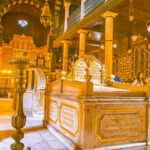 Egypt has many exciting places to visit, like the Ben Ezra Synagogue. Every city in Egypt is known for something, and Egypt’s ancient people lived in most of the cities. Cairo is the most well-known city in Egypt because it is the capital and a place where people from many different cultures live and visit.

There are a lot of churches and mosques in Cairo, but not as many synagogues. After the Jews were kicked out of Spain, they started to move to Egypt. After the Suez Canal opened, there were more business opportunities, so more Jews moved there.

In the 1950s, Egypt began to send Jews away. So there aren’t many synagogues in Egypt, but the Ben Ezra Synagogue is the most well-known one, and this synagogue is one of the biggest and oldest in Cairo.

The History of Ben Ezra Synagogue:

The synagogue is the oldest in Cairo. And Jewish stories tell us that Moses, peace be upon him, had chosen a place for prayer next to the Nile in what was later known as Fustat. Still, according to al-Maqrizi, the synagogue was originally a Christian church, and it was sold at one time to the Jews. The reliance on this goes back to news about a church in the name of St. Michael in Al-Baqa’a, which has no trace today, and sources indicate that it was sold in 882 to the Jews to collect some amount of money, which Ahmad ibn Tulun imposed on the Christians. At the time, Abraham Ben Ezra paid 20,000 dinars.

It is dated that the synagogue was rebuilt again, and the condition of the building worsened so much that the sect decided to demolish it and build it again in 1890. Its conditions worsened again until the Egyptian government renovated it in partnership with the Canadian Center for Architecture in 1991, and it turned into a well-known tourist attraction.

The Ben Ezra Synagogue, the city’s oldest Jewish temple, is tucked away in the narrow lanes of Coptic Cairo and dates back to the ninth century. Almost all of Egypt’s synagogues are now only tourist attractions due to the substantial Jewish community leaving Egypt in the 1950s after Israel’s formation and the Free Officers’ Revolution. However, this location is still very significant in the history of Judaism today.

The easiest way to characterize a synagogue is as a location where Jews gather to pray. Additionally, a temple was a Jewish congregation that met for religious instruction and worship in ancient Greece.

The Synagogue of Ben Ezra in Cairo, which is now situated behind the well-known Hanging Church in the district of Old Cairo, was formerly known as El-Shamieen Church.

The Old Testament used to be kept in the synagogue, and it is thought that the prophet Ezra or Al-Azir wrote it. Additionally, it’s believed that the synagogue’s location is where the pharaoh’s wife discovered and took the box containing Baby Moses at the time.

To pay the annual taxes levied by the Muslim rulers at the time, the Christians who originally owned the Synagogue of Ben Ezra surrendered it to the Jews in 882 AD. As a result, Abraham Ben Ezra, a resident of Jerusalem who arrived during Ahmed Ibn Tulun’s rule, paid 20,000 dinars to acquire the church.

The synagogue underwent various repairs and reconstructions over the years. After the initial collapse, the building that is present today was constructed in 1892. It had two stories and was built in the form of a basilica or a rectangular shape. The entrance is on the north side, and the first floor is for males, while the second story is for women.

The temple used to be a church called the Church of El-Shamien. The Orthodox Church sold it to the Jewish community when it was having trouble paying its bills because of the higher taxes that were in place at the time. Researchers and modern Jews call the Temple of the Philistines, also called the Temple of Al-Shawam, the Geniza temple because it is where the famous collection of Geniza documents was found in 1890.

Construction of the Ben Ezra Synagogue:

It was built in Fustat, which is in Old Cairo. Behind the Hanging Church is where it is. It looks like a Turkish basilica. It has three parts, with the largest one in the middle. It has two floors: the one on top is for women, and the one on the bottom is for men. The altar for reading the Torah is set up on a marble bimbo in the middle of the lower floor.

There are capitals on the marble pillars that are beautifully carved. This synagogue is decorated with pieces of art from Egypt, Byzantium, Islam, and Christianity. In the middle of the ceiling is a big Star of David surrounded by arabesques from the Ottoman Empire.

The Synagogue site has a long and fascinating past. It was said that the box with Baby Moses was found there. It was also noted that the Prophet Moses chose this spot to pray or that Prophet Jeremiah built a synagogue, which the Romans destroyed so they could develop their Babylonian fortress. So, it was a synagogue after it was damaged, and an Archangel Michael-dedicated church was built on the site. Later, it was turned back into a temple.