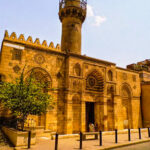 El-Moaz Al-Deen Street is home to some of Islamic Cairo’s most impressive landmarks. When the city was first established in the eleventh century, this street served as its primary thoroughfare and was where palaces and mausoleums were built. Between Bab El-Fotouh and Al-Azhar Street, the northern portion of the road has recently undergone restoration and is now open to visitors. People like to spend time in this area of Cairo because it is among the most picturesque. One of the city’s spectacular sites is the Qala’un Complex.

Who built the Al Aqmar Mosque?

Al-Ma’mun al-Bata’ihi, the Fatimid vizier who held this office from 1121 to 1125 under the Caliph al-Amir, was responsible for constructing the mosque. He served the Fatimid Caliphate shortly after the First Crusade’s unexpected invasion, during a time of immense political and spiritual difficulty.

Building of the Al-Aqmar Mosque:

Additionally distinctive, the facade is embellished with three fluted hoods around the portal and on either side and lovely inscriptions. Many elements of this mosque’s design have become typical of mosque construction in Cairo. The front of the mosque is renowned for its intricate stonework, while the interior of the building welcomes all visitors with a crisp wind.

Al Aqmar mosque was initially constructed higher than street level, above a shopping area and a souk, and is regarded as one of the first hanging mosques in the history of Old Cairo. The businesses continued to rise, but the mosque now appears to be at street level. The mosque was the first to be built with an entrance facing the existing street plan rather than the direction of prayer, or Qibla, which is Mecca. Some historians claim that because this style of design was unheard of during the Fatimid era, the mosque’s ceiling was redone during the restorations of Mamluk Amir Yallugha Al-Salami.

The most miniature mosque in Cairo is called Al-Aqmar, which stands out since it has the oldest stone facade. In 1125 AD, the mosque was constructed during the reign of Caliph al-Amir bi Ahkam Allah.

The Al-Aqmar Mosque stands out for its superb technical conception. It was designed as an irregular rectangle on the outside and a regular rectangle with inside borders that measured 28 meters in length and 17.5 meters in breadth because it was erected on the corner of two streets on a narrow corner.

Don’t miss to check out our article about Islamic Cairo